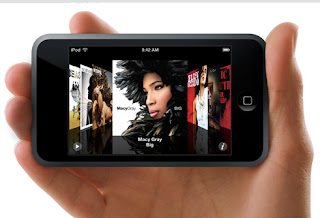 Look at it.  Isn't it sweet?  Just looking at it again makes me WANT one.  Yesterday, Apple launched their 6th Generation iPod and yes, I WANT one.   I have absolutely no need for one.  But, I found myself yesterday spending time on the Mac Rumors message boards picking up tidbits on the announcement even as the live event was going on trying to figure out how I could talk me into allowing myself to have one.  It was a fascinating event to observe (the internal struggle within me, not the iPod launch).
Yesterday, I was reading Ethan Nichtern's (my favorite Buddhist teacher) One City book and I was on the chapter concerning rampant consumerism. Ethan revealed that even though he is a long time Buddhist and meditator he still wants a new iPod every time one is announced.  Ethan talks about iPods a lot. I think Ethan shares my problem. Then, there was a guy who started a thread titled "Just Kill Me". His wife, after forbidding him to buy a new iPod to replace his that had died presented him with a brand new 5.5 Generation iPod on the very day Apple announced the 6G iPod. He was on the board to vent a little because she had it engraved, rendering it unreturnable. He was miserable. Even as I consoled him giving him all the reasons he really didn't need a 6G iPod, I found myself starting to whisper to myself as I read about the new features "Oh that would be so cool to be able to do that! I could use that!"

In Ethan's book he talks about the general feeling of WANT that so many of us experience. It's not focused on any specific object. It's just that non-specific need to acquire. I definitely see that in myself. I wish I had discovered Buddhism 20 years ago. Because, in spite of knowing this about myself for a while, before discovering Buddhism and meditation it hadn't really been in focus for me and it was much more difficult to identify. Now when it rears it's ugly head, at least I can see it coming. Ethan also talks about how we can become addicted to a certain lifestyle or even a brand so that all an advertiser has to do is push that button and we're off to the store to buy the latest widget. I used to laugh at the Apple freaks that thought Steve Jobs was the Messiah and who spent hours, days and weeks discussing all things Apple. But, I periodically find myself attracted to those rumor boards. And while we have five iPods in the house (and 4 people) and I rarely even leave the house, I found myself wanting a new iPod just because it was available. I was thinking how cool it would be to be the first kid on the block with the touch iPod. How I could use the WiFi when I'm at Panera waiting for Jon to show up. How sweet it would be to have CoverFlow (even though I hardly ever even glance at my iPod screen now. I never watch video on it. I have pictures on it that I think I've shown to one person. And I bought the one I have now simply because I got a great deal on it. I had a 20 GB one before that that I knew I would fill some day. So, I got the 30 GB just because the deal was available.

It's not just Apple that has me in their grips, I realized. We got a new car for Ty last Saturday. Until then, I was perfectly happy with my 7 year old car. But, every time I take my car in for service, they give me a brand new Lexus loaner. "Ooh, that new car smell!" "How can I live without a GPS system?" All the justifications start rolling through my brain and I find myself having to fight getting that next fix of something new.

I love the rush that comes from bringing home something new. Pulling it out of the box, putting it together. It's better than cocaine (I guess- I wouldn't know from personal experience). Just typing this gets my heart beating a little faster. I can imagine unpacking that new iPod.  Apple packages things so nicely, I almost hate to pull them out of the box and mess it up. But, it's such a transient high. Usually it lasts a few days, a couple of weeks at most. Then, I need that next new thing.

The good news is I am a cheap son-of-a-gun. I make myself justify every purchase to myself. So, there is a pretty good governor on my spending. I WANT an iPhone. But, I've forbidden myself to buy one. I WANT the new square Nike driver on the market. But, that has to wait at least two years I've been told. No new car for you until the Mazda is paid off, Mister! But, just observing this has been fascinating for me. And, now Buddhism has given me the tools to deal with it. As Ethan points out, Buddhism (meditation) is not an instant cure (or even a long term cure). But, the first step to defeating any problem is realizing you have it and the second step is admitting it.

"Hi everyone, my name is Brian and I am a WANTaholic".

Email ThisBlogThis!Share to TwitterShare to FacebookShare to Pinterest
Labels: Buddhism, My Journey, Observations