Jem's New Gem- Down To Earth 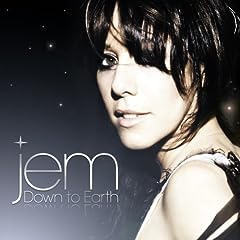 Jem's new album Down To Earth just dropped and it's a gem. Here's the title track followed by my review of the album.


Jem widget by 6L & AC
I don't review too many CDs because it's just hard to describe music. But, every once in a while a new artists or a CD will come along that I feel compelled to share with anyone who will listen. A couple of years ago someone on Last.FM recommended Jem to me. I had never heard of her. I'm not sure how many of you have. I bought the CD and was immediately hooked. I couldn't wait for another one to come out. You have to understand that as an old geezer now, I've turned into one of those people who complain that all the music "the kids" listen now-a-days is garbage. It all sounds alike and none of it's worth listening to. Not back like in our day. It takes a special artist to wake me out of my musical funk and stop playing all the oldies from the 70s and 80s. Jem is one of those artists. Her first album "Finally Woken" was phenomenal. I like artists who write their own songs and I pay a lot of attention to lyrics. Jem's songs are not only musically appealing. But, her lyrics are uplifting and thought-provoking. I like her view of the world. I could go on about her first album. But, as good as that one was, her sophomore effort "Down to Earth" is even better.

Jem has a slightly smoky voice that is just as enjoyable on an up-beat dance tune as it is on a moving ballad. This album is very varied in style but does not come off as disjointed. There are so many CDs now where even after several listens, I can barely tell one song from another. The picture Jem paints with with this CD uses the full palette of colors, not just many shades of the same color.

Email ThisBlogThis!Share to TwitterShare to FacebookShare to Pinterest
Labels: Music