During the campaign I predicted that if Obama were elected, we would see an effect on the psyches of young black men and women that would elevate their self-esteem and pay dividends in better education, lower crime rates, etc. Whether that happens or can ever be proven statistically remains to be seen. But, there are already anecdotal stories of Barack and Michelle Obama inspiring young black men, women and children to reach for things they would have otherwise thought beyond their grasp.

This picture touches me deeply. As someone growing up just after the Civil Rights movement, I can appreciate just how far we've come in a generation and the hope this gives for the future. 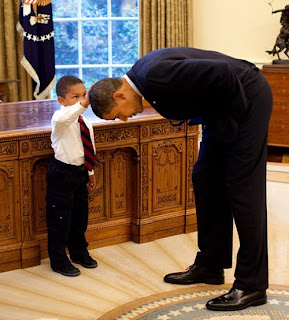 I saw that picture last week too.. I love it.. so heartwarming and inspirational.

This picture speaks volumes for all of us.