Life After Death- The Burden of Proof- Book Review 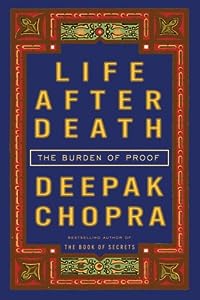 Cover of Life After Death: The Burden of Proof

If you've known me for any length of time, you probably know I am obsessed with the topic of life after death.  It's probably the result of being told for the first 18 years of my life that this life really didn't matter except as the test for whether you go to heaven or hell.  Whatever, the reason, I still have this fascination with peeking behind the veil and seeing what's on the other side.  I don't know how many books I've read on near death experiences and life after death.  But, of all the books I have read, I think Deepak Chopra's "Life After Death, the Burden of Proof" is probably my favorite.

The book doesn't try to prove life after death merely by talking about NDEs.  It's really more about cosmology and the nature of reality than it is about trying to track the soul after we die.  Chopra draws deeply from an ancient Indian tradition called "Vedanta".  I found it fascinating that throughout the book, he relates recent scientific discoveries to ancient religious traditions.  The book looks at at death and the universe completely opposite from the way Christianity and many religions view death and the way modern scientists view the material universe.  Death is seen as a miracle, similar to the miracle of birth.  I was taught that death entered the world through sin and is the enemy.  Something to fear.  The Devil and Death are the enemy and God rescues us.  Chopra says death is a miracle that:

The afterlife begins to make sense when you take the approach that consciousness is not in the brain.  But, the brain is more like a receiver of consciousness.  This is a model being investigated by some neuroscientists.  Science cannot tell us how the brain works. We can see it working, different parts lighting up as we think or dream.  But, we are obviously more than just our brains. For example, while many people believe that our brains produce our thoughts, thoughts actually can change brain chemistry.  Since drugs are somewhat effective in treating depression one could say changing one's brain chemistry can change one's thoughts.  However, talk therapy works as well and can produce changes in brain chemistry.  Meditation can produce changes in brain chemistry.  It's definitely not a one way street.  While depression can be caused by chemical imbalances, a depressing event can lead to those chemical imbalances.   So, our thoughts are clearly not only produced by our brain chemistry. Something, outside of our brain, is the observer, the creator.

The book does touch on Near Death Experiences (NDEs) and OOBEs (Out Of Body Experiences).  It also talks about different levels of reality from the physical all the way up to the ultimate level (called the Akashic field in this book).  The heavens and hells experienced by people who have had NDEs are temporary stops along the way (as many who have had NDEs have reported).  They are largely created by the mind and the expectation of the person dying.  Of course, scientists have said this all along- they're purely subjective experiences and do not reflect reality.  But, this brings us to the question as to what the nature of reality is.  If you're in a dream and you can't wake up, that is reality to you.  We call this reality because it's a shared experience.  But, reality is whatever your senses tell you it is.  None of us experiences reality directly (in this body anyway).   How much do our minds create "reality"?

At the point of death, our ties to the physical world fall away and we begin to experience more directly the other two realms (the subtle world the the world of pure consciousness).  Chopra talks about how we can begin to shift our focus on these realms of reality before we die.

In the second part of the book, Chopra talks about the burden of proof.  He addresses the following five questions:

If we can answer all of these questions in the affirmative, it's not so hard to believe that we survive the death of our bodies (really the death of our brains since that is where the mind is said to reside).  Chopra links the question about Akasha to what scientists are discovering about the ultimate nature of the universe.  He gets into some pretty complex physics that I have to confess I don't really understand.  But, what is interesting is that the word Akasha has an English equivalent- ether.  Up until the late 1800s scientists believed there was no "void" in space but everything was transmitted through the ether.    Physicists more recently have gone back to a model that says space is full of activity in the form of invisible fluctuations in the quantum field.  Physicists have come up with a Zero Point Field which contains not just what we see in the universe but everything that could possibly exists.  This "field of fields", this seething exchange of energy is what everything that exists pops into and out of existence.  The Zero Point field has been calculated to contain 10 to the 40th power more energy than the visible universe.  This sounds a lot like what religion has been telling us that the unseen is incredibly more powerful than the seen.

That last paragraph may have been over your head (it's over mine).  Chopra goes on and gives some analogies that are very helpful.  Basically what he is positing it that our physical world is projected from a nonmaterial source.  The invisible world comes first.  And, reality increases the closer one gets to the source.  As we die, we do not blink out of existence. We move from the projected to the real.

The next chapters go on to address the other questions asked above.  Chopra concludes with a poem by Rabgindranath Tagore.  He only gives part of it.  But, I've looked up the whole thing.  Some of the words in this translation are slightly different than Chopra presented them.  I like this one better.  I've been reflecting on this for the last few days and it has brought me comfort.  I fear death because it's a journey into the unknown.  But, this poem relates death to birth.

I was not aware of the moment

when I first crossed the threshold of this life.

When in the morning I looked upon the light

I felt in a moment that I was no stranger in this world,

that the inscrutable without name and form

had taken me in its arms in the form of my own mother.

Even so, in death the same unknown will appear as ever known to me.

And because I love this life,

I know I shall love death as well.

The child cries out

when from the right breast the mother takes it away,

in the very next moment to find in the left one its consolation.

Interesting. I too have a big fear of death. Interesting to think of it as a birth of sorts.

I was in Hannibal, MO several years back on vacation and purchased a book that was a collection of Mark Twain's unpublished short stories on religion. In one story he tells of the man who gets to heaven and grabs his robe and crown and harp and wings and heads straight up the clouds to sing - only to notice discarded items along the way. After about 3-4 hours of singing God's praises - well, we can only sit thru a concert for so long before we get tired and this man leaves that cloud only to find his wings aren't getting him around all that well either. He has other stories - humorous and very enlighteneing.

We graduate from earth at death - it is a step - spiritual evolution. lol - Earth is the Matrix - heaven is reality. This is merely space and time - the next live that constraint is removed.

However, don't you think there's a danger that relates to why you're interested in Life after Death? Much of Christianity dismisses this earthly life as unimportant, if not downright evil. The "Aftelife" is what really matters. (It seems that you, like I, encountered plenty of that.) So is there not a risk that a view like this - that essentially says the next life is the "real" one, whilst this one is an "illusion" - does exactly the same thing?

I don't know quite how to counter that - without downplaying the next 'life' - but I think it's an important trap to avoid.

Thanks for your comment. You make an excellent point. Yes, there is a danger. But, I don't think it's so much falling into the trap of thinking the next life is the important one as much as never having climbed out of the trap I was in in the first place.

At least now I'm not worried about only living this life to try to cross some threshold of avoiding hell, as I was in the past. I am much more focused on trying to be good simply because thats the way I should be rather than trying to measure up to some (impossible) standard. So, that's progress.

Something else just occurred to me, Graham. By demystifying death and taking the fear out of it, what I have found is it does make it easier for me to stay focused in the present. So, for people like me, who had an obsessive fear of death, the way to get over that fear is to face it.

When we remove, first the fear, and allow the mystery to replace it, it does, I believe allow us to focus on the NOW. My fear of death is gone. I know that's easy to say until I actually face it. But I truly have no fear of death. Instead, I look forward to the adventure that awaits on "the other side". That is about all I am sure of at present.
I shall add Chopra's book to my list.

What was done said...

Here is a kind of life after death you can be sure of...
http://www.whatwasdone.com/Age.php?&Age=-1

Because Understanding the meaning and significance of death is the key to right life altogether.

Please check out a radical Understanding of death, and hence everything else via these related references.

I consider, that you commit an error. Write to me in PM, we will communicate.

Just one thing, the meaning of Akash (Sanskrit : Aakash or Aakas) is sky/space !