Lord Save Us From Your Followers 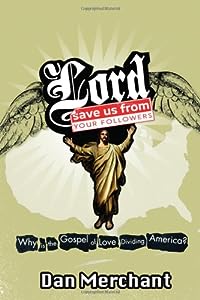 Cover via Amazon
I just watched a really very good film called "Lord Save Us From Your Followers". My favorite line from the movie (actually a quote from St. Augustine delivered by Tony Campolo) was "The church is a whore. And she is my mother.". I love that line. The church has done so much damage over the centuries. The church has "broken her marriage vows to Jesus" (as Tony phrased it) and has not been loyal to His ideals. But, if it weren't for the church I would know nothing about Jesus, I would not have the Bible. The church has been vital in preserving the gospel of Jesus. The interesting thing about Christianity is that while there are a lot of people who don't like Christianity or Christians, there are very, very few people who don't admire Jesus.
From the website:


If you were to meet ten average Americans on the street, nine of them would say they believe in God. So why is the Gospel of Love dividing America?

Dan Merchant put on his bumper-sticker-clad jumpsuit and decided to find out why the Gospel of Love is dividing America. After talking with scores of men and women on streets all across the nation, and also interviewing many well-known active participants in today’s “Culture Wars,” Dan realized that the public discussion of faith doesn’t have to be contentious.

I thought the movie would be a hatchet job of all the ways Christians and the church have screwed up (and continue to screw up). I was pleasantly surprised. I think the movie was a good, frank look at the good, the bad and the ugly of Christians and Christianity and there was a lot of good in there. He also takes on the "culture wars" in America and I found that part to be also very, very good. The movie is filled with news clips and interviews from both Christian and non-Christian sources. A couple of my favorite moments were the confession booth that Dan Merchant (the filmmaker) set up at a gay festival. The confessions though were reversed. He confessed to the gay participants in the parade his sins and the sins of the church against gay people. (if you've read Blue Like Jazz you've heard of this type of confession booth before). The reaction of the people was fascinating. Another really cool social experiment was a family feud challenge between liberal/elite types and conservative types. The test was to see how much they each understood about current culture. I won't spoil it for you by giving you the outcome.
Overall, I found the movie to be inspirational and uplifting and I think it's a good movie for both Christians and non-Christians to see. I do recommend it.
Peace,
Brian
p.s.- I think the movie was in theaters last fall. You can buy it on DVD now and you can get a license to show it in your church. I'm cheap. I watched it on Netflix.

It's available for streaming on Netflix too. I'll have to check it out. Thanks!

Robyn will be out of town this weekend. I'm thinking of watching it then as I doubt she'd be interested either.

Interesting how in these internet circles I come across folks who I've met independently who are conversing with one another.

Thanks for the review Brian, and the links.

Thanks Mike!! And thanks for the follows. :-)

My pleasure! I look forward to reading your posts. I really need to write a new one!

I look forward to it when it clicks onto the screen.

Just watched it. Very powerful! I broke out the tissues when he set up the confessional booth and later when the folks from Night Strike were washing the feet of the homeless.

I'm glad you liked it, Mike. It was better than I expected. The foot washing thing was EXTREMELY powerful. The church I grew up in had a foot washing ceremony, I think it was once a quarter. It's amazing.

Oh yes, Lord, save us from your followers; those who put faith in you.

We know you sit day after day in heaven, wringing your hands and weeping, praying that Christians stop being the real evil in the world!

We know you taught, "Love your enemies and refuse to condemn anything they do in the name of God, but to hate your brethren and condemn them always; even if the accusations of their many sins are false--just to show our great love for our enemies at all cost; lying is ok when its for the greater good."

I wouldn't watch this film because its very title is judgmental, hateful and condemning--but I'm sure that's what attracts Liberals everywhere to it. I'm sure homeless people are just panting; praying to have clean feet. What self-righteous hypocrisy being demonstrated!--rhonda