I See The Christ In You- Namaste

Image via Wikipedia
The past couple of days Nexus was fortunate enough to have a Christian singer- Shawn Thomas join us for our Christmas party, worship service Sunday morning and a special concert Sunday evening. One of Shawn's songs is titled- The Christ In You. Christians are challenged to see the spirit of Christ in each other. It's easier with some than with others.
I have to admit that Shawn's type of music- worship and praise, has not been my favorite kind of music. I had never heard of him before one of our members brought up his name and said that we might be able to get Shawn to come and play a concert for us. I listened to some of his music and thought it was OK. But, what impressed me about Shawn is his ministry. Shawn travels around the country on weekends performing at churches. Nexus is a very small (and struggling church) and could not guarantee any certain amount of money to compensate Shawn for coming to spend a weekend with us. Shawn isn't exactly local (operating out of West Palm Beach, FL). So, for him to come play a weekend concert for us was going to require at the very least a flight and and overnight stay. I was amazed to find out that, for churches like Nexus, Shawn was willing to come play for us for just the agreement that we would take up a voluntary donation for him. No guaranteed minimum, no selling tickets. He was not even assured that all of his travel expenses would be covered. Talk about stepping out on faith!

I met Shawn on Saturday evening at the Nexus Christmas party. At first he seemed a little shy to me. But, when he got up to perform, he immediately lit up. Here he was in a room full of strangers (well actually a handful of strangers because we are a very small group) and he made an instant connection once he got up on stage.
Shawn stayed with one of our members while he was in Cincinnati. In addition to playing at the concert on Sunday evening, he gave us a private concert Saturday night and joined us for worship on Sunday morning where he also played a couple of songs. 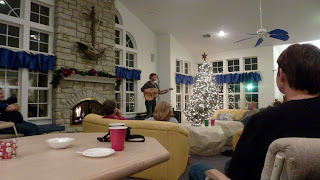 Shawn's concerts were extremely enjoyable- much more so than I expected. I loved his music and the way he engaged everyone in the experience with sing-along songs, projecting the words in video, sign language and even mandatory dance moves. He has a very pleasing voice and a great stage presence. I enjoyed talking with him and learning more about his ministry. Shawn is an openly gay Christian (I know an oxymoron to some). But, his "act" is not about being gay or being straight, it's about being someone who loves and worships God and, as much as possible, lets the spirit of Christ flow through him. As he sang 'The Christ In You", I was reminded of the saying "Namaste" Loosely translated from the Sanskrit it means "The God in me recognizes the God in you" or "The Divinity within me perceives and adores the Divinity within you." Shawn reminded us that, as Christians, one of our challenges is to see all other (Christians) around us as Christ. I believe that extends to non-Christians as well, as we are all made in the image of G-d. In Shawn it's extremely evident. My thanks to him for the time he gave to Nexus and I wish him well in his future endeavors.
Namaste, Shawn.

WOW!! That song was so moving Brian! The message rings so true. I pray that our inner eyes would be opened so that we would always find a way to get past appearances and see Christ in each other.

That is a beautiful song packed with truth!! When we see Jesus in others, we need to tell them. :)

A little off topic, but... I notice in your profile you are from a Pentecostal background and now embrace Christian Universalism. Do you still flow in the "gifts of the Spirit". I spent years in the Charismatic camp and have turned to Christian Universalism over the last ten years or so. Many of my friends that have done the same have turned their backs of the prophetic, healing, miracles, ect. I have not. This has left me in the position of being outside almost all groups. What are your thoughts?

I don't rule out the possibility of the gifts mentioned in the New Testament. I do believe that certain people have abilities beyond our understanding. While I no longer believe that speaking in tongues is necessary as a sign that one has received the Holy Spirit (Holy Ghost in the good old King James), I definitely believe that G-d has gifted some people with very special abilities/"gifts".