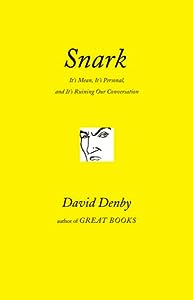 Sometime around the beginning of April, I read a blog by a woman who had decided to try to go "snark free" for a month as a spiritual practice.  The idea is to avoid snark- a contraction for "snide remark" in an effort for "right speech" and to observe things about oneself.  Since it was around the time of Lent, I decide for the month of April I would, as much as possible, avoid snark in email, on Facebook and face-to-face.  Given the nature of many of my conversations on Facebook, I knew this would be a challenge.  And, making the declaration public ensured I'd have the harshest of judges/critics keeping me in line as I made this journey.
The first thought that popped into my head when I decided to take on this challenge was "Can I do it?"  I come from a family that is the royal family of snarky remarks.  Giving each other a compliment?  Well, that's a monumental undertaking.  But, we are always ready with a "witty retort".  Would being snark free stifle me?  Could I really be "me" without snark?  I was willing to give it a try.
About two weeks in I said something about being snark free in front of my daughter who asked "You've given up being snarky?"  First observation, people rarely notice when you make a change like this.  Try it. Just try being super nice for a day or a week.  Compliment people you don't normally compliment.  Hug your spouse more.  For the most part, I bet no one will notice.  We notice negative changes about people.  We'll notice when someone is more grouchy.  But, we rarely notice when people change for the better.

Now, was I truly snark free for a month?  No way.  And, I did allow myself exceptions for humor.  I was less snarky though.  I didn't follow the rules of the person's blog that I read.  I had my own rules/goals.  I didn't beat myself up when I failed.  I said going in that when I failed, I'd take that as a learning experience. Notice I said "when I failed", not "if I failed".  I knew I would fail.  That is part of the practice. When I failed, I'd take a mental note of it and start over.  And, I believe every time I made a snarky remark I was actually aware of it and took a mental note.  Being snark free made me a more thoughtful person (not thoughtful as in considerate but thoughtful as in aware of what I was doing).  I was more observant of the thoughts that proceeded my remarks and how I could choose which to express and which to keep to myself.  I was more aware of just how judgmental I am, how critical I am of others- both those close to me and strangers.  At times I was a more quiet person, as I couldn't find anything not snarky to say about what I was observing.  I was more aware of just how often I stream a running commentary of my opinions of things going around me (as if anyone really wants to know just what I think about everything).  When I did choose to let loose with some snark, it was a conscious choice rather than just a habit.  Being snark free also greatly heightened my awareness of just how snarky we all are.  One of the rules of being snark free was I could not try to make others lives up to my new found standards. But, I began to find the remarks of my wife and daughters increasingly distasteful as I became more aware of just how ubiquitous snark is in our society.
When I started this, I thought at the end of the month, I'd make a few mental notes about the experience and go back to my old self.  However, I found the less snarky, more aware me to be a buy I liked better.  So, I have decided to extend the practice.  I don't know if my wife or my daughters (or anyone else) is aware of the change. But, what really matters is that I am.  I'd highly recommend this to anyone.  It doesn't have to be being less snarky.  Maybe turn it around and instead of looking at it as giving up something negative try being more complimentary or more loving as a conscious practice and see how it makes you feel.

Email ThisBlogThis!Share to TwitterShare to FacebookShare to Pinterest
Labels: My Journey, Practice

Very good idea. I think we all should try this for at least a week. Most likely won't be easy for me as I can be the Queen of sarcasm at times. I will pray over this and wait for the Grace of God to enable me to accomplish this.

Most of my snark and sarcasm are for humor's sake, but I am also conscious of using it to convey criticism.

I remember when the show Rosanne first began, I didn't care for it because of the snarky way they spoke to each other. Once I gave the show a chance, mainly thanks to TV Land, I could see beyond the snark and see the love the family had for each other.

Thanks for sharing your experience, Brian. It has made me think about my own use of snark, and I hope to control it better.

I'm a pretty sarcastic towards my friends and family. However, it's almost always in jest. Even if I say something "mean", the person I'm saying it too knows I'm not being serious. It's more for humor.

I don't usually use snark for serious criticism or to be mean. If someone asks me for constructive criticism, I try and give it in a nice way. As for being mean, like when I'm angry, I try and just keep my mouth shut. If I fail, it's probably with my little sister, who knows just how to push my buttons. Some of those comments are probably snarky.

I might have to try this little experiment though. I'm probably being snarky way more than I realize.

Please don't take away my limited ability to "snark", in my own pitiful, limited way!

"We'll notice when someone is more grouchy. But, we rarely notice when people change for the better."

So true Brian. Kudos for trying to go it a whole month.

God has really been working on my mouth since the last comment I made. I guess it was time to tone it down a bit anyway. God timing and ways are so awesome.

I see a big difference in me.