Insurrection- To Believe is Human- To Doubt, Divine- Review 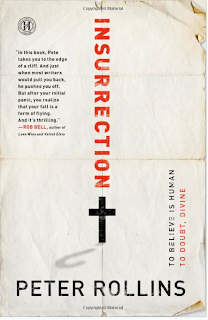 I read a lot of books on theology. I generally only review the ones I like.  For example, I read (most of) The End of Religion: Encountering the Subversive Spirituality of Jesus

and found it not nearly subversive enough- along with a few other books I haven't even bothered to finish. Rob Bell's Love Wins (reviewed here) was supposed to be so controversial (snore).  So, when I got Peter Rollins' book with a quote from Rob Bell on the cover as to how it was supposed to push me off the edge of a cliff I wasn't exactly shaking in my boots.  This, though is probably one of the three most dangerous books I have ever read, ranking right up there with Pagan Christianity and How to Quit Church Without Quitting God.  Right there in the introduction Peter introduces us to the idea of pyro-theology, burning away the rot to reveal that which cannot be destroyed. Peter immediately sets the place on fire by saying that having faith in the god of religion is not a divine characteristic but a human one.  We all naturally desire someone to love us unconditionally, someone to watch over us and make sure that everything is all right and that we make ourselves believe in this god.  This claim may sound familiar- as atheists have been saying it for decades. What is surprising is hearing this come from a Christian author- in his opening chapter.  The first thing he challenges us to do is to unplug from this God of religion and open ourselves up to doubt and unknowing.  The central theme of the first part of the book is that the crucifixion is a (the?) defining moment in the life of Jesus. Taking part in Jesus' crucifixion is not the abandoning of everything for religion or for God. Taking part in the crucifixion is the abandoning of everything, including God and the certainty and comfort that provides us.  After all, when Jesus (God) was hanging there on the cross His last cry was "My God, my God why have you forsake me?"  If God was not there at the moment when God needed Him most, why should we not expect the same? Rollins says the "dark night of the soul" which we all fear so much and look at as an exception that some Christians must pass through is not an exception at all. Nor it is something we pass through.  It's part and parcel of Christianity.  It's not something to be avoided but something to be embraced.  We cannot participate in the crucifixion of Jesus (something all Christians claim) without experiencing this doubt and absence of God.


We all know people who say "I'm not religious, I'm spiritual." But, many people who say that still believe in the old Sunday school sky-god in their hearts.  They still participate in church services that re-affirm this God of religion.  They talk about the fact that they've moved on and no longer embrace this view of God.  But, the Church service every week gives them that nice security blanket- singing songs, performing rituals and saying prayers out this God.  So, they never fully embrace the emotional reality of this intellectual assent.  This struck me very personally as I have given up on the idea of God as another object or as a big old man in the sky a long time ago. But, I have said things to the effect of "My pastor believes for me.".  Peter takes away all of those security blankets exposing the coping mechanisms we put into place to keep from truly facing up to this "crucifixion" addressing the believer who has left church and even the "atheist" who continues to benefit psychologically from the believers he still hangs out with- the faith of a parent, child or friends. He ends the third chapter with this line:

It is only as we are cut loose from religion in the very depth of our being- experiencing an existential loss of God, rather than some mere intellectual rejection- that we are free to discover a properly Christian expression of faith.

So, now Peter has told us that we have to give up any thought of God as a psychological crutch to be a true Christian. This is not a crisis of faith.  This is not something that just the most holy of saints must endure, this is something we all have to face to truly take part in Jesus' suffering.  This is totally antithetical to the teaching most of us receive.  The whole point of the church is to affirm our faith in a God who is there for us to avoid anxiety and fear.


The second part of the book is called "Resurrection"  But, this isn't the part where, like in the traditional sermon, God swoops in to save us from our unbelief or is there in spite of our unbelief. Frankly, at this point I got kind of bogged down in the book after it got off to a very fast start.  But, when I started to get interested again was when he began talking about the life that comes after we have gone through the crucifixion.  I mean the crucifixion would be pointless without a resurrection.  But, we are not resurrected back to the self-assured life of believing in the sky-god. We are resurrected to know that life is not about escaping this world and going off to live with God.  We are resurrected to accept this world and our limits and fully embrace the beauty and the ugliness of the world.  When we are caught up in the religious worldview, we are encouraged to give up the world to find God.  While we may say God is both immanent and transcendant, we really live as though God is out there. So, either we deal with the fact that we will not experience God in this world or we live for those glimpses when God breaks through. During our normal day-to-day life, God, (the object of our desire) is elsewhere.  Thus, we can never have any sustainable satisfaction and are condemned to a "type of half life".  When we are resurrected, we no longer approach God as an object, a separate "person" or a thing.  We no longer talk about "loving God".  We realize that God is loved through the act of love itself.  It is literally true that we cannot love God and hate our brother.  We love God by loving our brother.  God is no longer something "out there". We become immersed in God by being fully immersed in the world.

The book is full of short stories/parables. My favorite comes at the beginning of Chapter 7.  God is watching the Earth go through its final trials and tribulations, as has been prophesied.  But, then after the rapture instead of God staying in residence with those in heaven, descends to Earth to be with his people who have forsaken the promise of heaven for being deeply rooted in the Earth.


Another term, other than pyro-theology, that I liked in the book was A/theistic Christianity.  As my view of God has evolved, I find myself asking myself the question "Do I believe in God anymore?"  Peter says "What we discover here is that the question, Does God exist? is not a straightforward one for the believer".   For you that may be an unambiguous question.  For me, and for Rollins, it's not (anymore).

Brian,
Thanks for your review of Peter Rollin's book. Luv'd it!

My favorite quote from his book is

“We are also genuinely open to being wrong about parts and perhaps all our beliefs while at the same time being fully committed to them.”

It sums up the church of religion today for me.