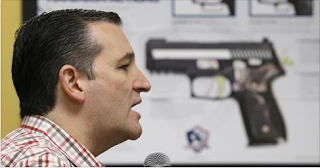 Yesterday on Facebook, I posted an AP article that had the above picture included.  I posted it with a simple "LOL" as a comment. I now realize that was a mistake because people thought I was laughing at the picture.  I was not laughing at the picture. The picture is not funny.   It's a powerful and provocative image. I was laughing at the reaction to conservatives whose heads were exploding because AP ran a picture of Ted Cruz, speaking at a Second Amendments rights "celebration" in a room full of gun posters and the photographer got photos of Ted Cruz with one of the posters in the background. Interestingly enough while I see a picture of Ted Cruz speaking with what is clearly a posted in the background, many conservatives see a picture of Ted Cruz with a gun pointed at his head and they are livid.

I don't know which version of the picture AP came out with in their article and I don't know if it matters. The photo was cropped on blogs, maybe to emphasize what had people upset.  Here is the original photo. 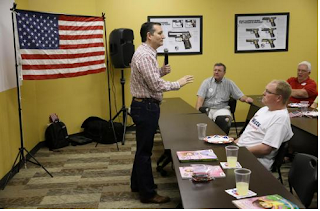 Now here is the thing.  Conservatives are upset that Ted Cruz, who was attending a rally about guns, in a room with at least two posters of guns, was photographed with a gun in the background, because the gun was "pointing at his head". First, it's not a gun. It's a poster with a picture of a gun. Second, it's not pointing at his head, it's in the background.  Our eyes and brains tell us it's in the background because of the bokeh effect which is even more clear on the cropped photo. The gun is out of focus. Clearly it's behind him.  That's what I see anyway.  One friend commented that the photograph was "selectively" and "highly" cropped. I'd be willing to bet 99% of photos we see area cropped. And all cropping is selective.  You remove the distractions and leave what is salient in the photo.  I will admit the image is a provocative one. It's a striking image. We see Ted, engaged in conversation with a gun in the image.  It tells the story very well.  It's much more powerful than the uncropped version.

But, more interesting than our perceptions about the photography is the perception of the inanimate object, the gun.  More precisely, the poster with a gun on it. For years my conservative friends have been telling me my fear of guns is misplaced.  My visceral reaction to a gun is wrong. I should not fear guns, they say. Guns don't kill people.  People kill people. Guns are no more harmful than cars or bath tubs or ladders.  I've been saying that there is a very big difference between guns and cars.  Cars are designed to get people from place to place.  When used as designed and intended they do not kill. Guns are designed to do one thing- KILL people.  Yes, I am uncomfortable around guns.  My eyes dilate, my heart beat quickens slightly and I'm put on edge. Even photographs of guns have an impact on me.  I just don't guns.  But, I've been told this reaction is wrong.

Guns don't kill people. People kill people. So, if that is true. We have a picture of a disembodied gun.  No person. It's a gun floating on a white background.  This gun is not putting Ted Cruz in any danger.

If guns are the same as cars and ladders and bath tubs, would people have had the same reaction had Cruz been standing in front of a poster of a car (even a moving car coming towards him)?


I've been asked "What if it was a picture of Obama or Hillary Clinton?  Then you'd be upset." Well, no and here is why.  If Barack Obama or Hillary Clinton went to make a pro gun speech in a room full of gun posters and a photographer had the opportunity to take this shot, he'd be a good and smart photographer to do it.  If someone Photoshopped a gun into an image with either them, then YES, I would be upset.

So, you tell me guns are nothing to fear. I should be comfortable with rednecks walking down the street with AR-15s slung over their shoulders.  I should feel comfortable with people I don't know coming into restaurants with holstered guns. But, when it comes to a photograph of a pro-gun candidate standing in front of a poster of a gun in a room he voluntarily went into, well that's something to be worried about.

Always love reading your blog Brian. I agree with you about guns. Don't like them. Was glad that I did not have to carry one (after basic training) when I served in the Army.

Non-hunters who own them seem to represent two ideas. Guns make me safe - in other words I am fearful. Guns make me feel powerful - in reality, I am insecure without them.

Could be other reasons folks own guns. What do you think?

Unknown said...
This comment has been removed by the author.
7:03 AM

I agree with you that gun don't kill people. But people kill people. When we use it, we have to think about its effective. Otherwise we will be cruel. We have to control ourselves.

Unknown said...
This comment has been removed by the author.
7:05 AM

Unknown said...
This comment has been removed by the author.
7:05 AM

I agree with you that gun don't murder people. Regardless, people slaughter individuals. When we use it, we have to consider its effective. Else we will be callous. We have to control ourselves. zentiz